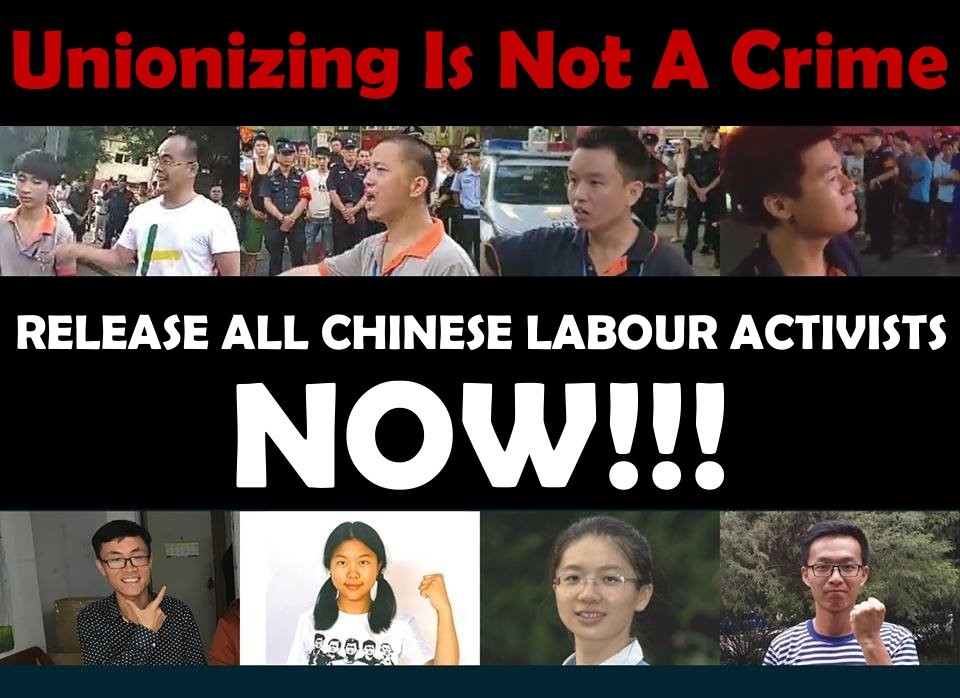 Workers in China have long been deprived of their freedom of association and rights to organize independent trade unions. According to labour laws in China, the All-China Federation of Trade Unions (ACFTU), which is effectively a Communist Party subordinate, has the statutory authority to govern all trade unions, including the establishment of grassroots trade unions. Thus, legally-approved trade unions are rarely organized independently and in accordance with the workers’ interests, forcing many workers to resort to their own means of self-organization during cases of labour disputes and grievances.

In the summer of 2018, workers from Jasic Technology, a welding equipment manufacturing factory in Southern China, were dismissed by the company for organizing their own trade union and were later criminally detained by government officials on charges of “Gathering a Crowd to Disturb Social Order”. As of today, more than 40 people are still under criminal detention, including worker representatives, student supporters, community centre, and labour NGO staff.

In January 2019, a number of longtime labour rights defenders from various labour NGOs were also criminally detained. Evidently, the Chinese Government is widely repressing labour activists who exercise their basic rights to freedoms of association and expression with coercive means, and such arbitrary detentions are blatant violations of labour rights.

The Hong Kong Confederation of Trade Unions (HKCTU) and Globalization Monitor (GM) hereby demand the Chinese Government release and drop charges against all workers, labour activists, and their supports who are criminally detained for exercising their basic rights to freedom of association, end repression against all labour rights activists and independent trade union activity, and ensure its laws observe the ILO fundamental principles of freedom of association.

This site uses Akismet to reduce spam. Learn how your comment data is processed.